A decentralized lending, staking, and borrowing built on Polkadot

The future of Polkadot is incredibly bright. Parallel Finance plans to make it even brighter by offering lending solutions tailored to Polkadot, with all the safety and security it has to offer. With leverage staking and auction lending as its primary offerings, Parallel’s new lending design has the potential to disrupt the somewhat stagnant DeFi narrative, with higher yields and better opportunities. In addition to building lending utilities, Parallel will also build and brand the user interaction interfaces necessary for interoperability in DeFi. Indeed, interoperable portfolio management will be a critical tool for doing business on Polkadot, and they plan to be the first to tackle this problem efficiently. This is one of the many areas where Parallel builds in the spirit of interoperability already implicit in Polkadot’s design, and makes it stronger as a result.

Parallel aims to be the go-to lending solution for DOT and KSM stakers. Through Parallel, users will have the ability to stake their DOT and KSM in exchange for tokenized staking derivatives called xDOT and xKSM. These tokens represent the redemption of the underlying DOTs and KSMs in Parallel’s staking pool. As you can see in the graphic below, the user can lend xDOT and xKSM to Parallel to receive an added borrower fee on top of their staking interest, which they refer to as “leverage staking.” After that, the user can create even further leverage by using xDOT and xKSM as collateral for borrowing. These tokens are already natively yield bearing due to the staking yields, which lowers the interest, and increases demand. The graphic below shows the workflow for creating leverage, and as you can see, the borrower can significantly increase their leverage by lending KSM, borrowing xKSM, and lending xKSM. While the user is lending and borrowing, Parallel will algorithmically optimize the users’ staking yields by nominating validator nodes with the strongest reputation, and the lowest number of DOT and KSM staked. When compared to current custodial staking solutions like Kraken’s, Parallel’s algorithmic staking solution outperforms both in security and overall yields. 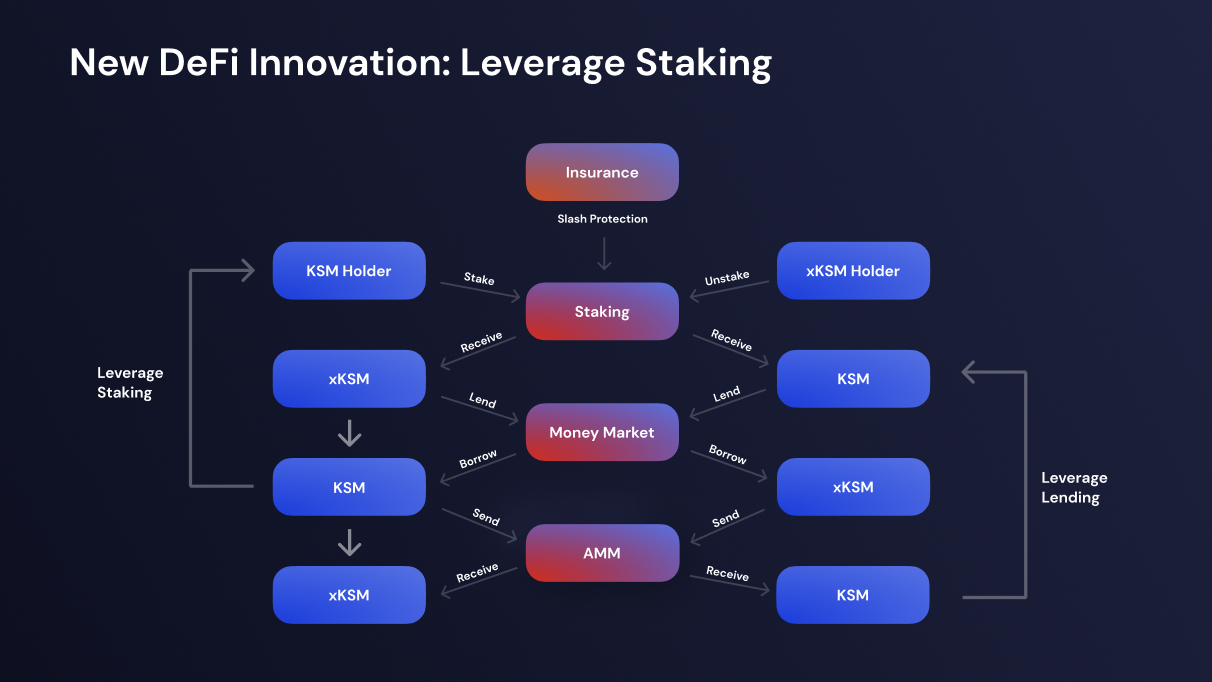 After retaining its own parachain, Parallel will be able to offer auction loans, a feature that has vast implications for DeFi on Polkadot and Kusama. Users will be able to deposit lending collateral for fixed or floating interest, and parties pursuing parachains will be able to borrow from that collateral to participate in parachain auctions. This means that in addition to incentives offered by projects, users will also earn a fixed rate on their auction loans. This kind of lending mechanism will be attractive for users who want to increase the value of their lent DOT and KSM, but also for projects who want direct access to users with capital to loan.

Ideal projections suggest that 30% of the total DOT and KSM will be locked in parachains, reducing the circulating supply by half, and generating an opening for a symbiotic lending and borrowing market intrinsically by virtue of Kusama’s and Polkadot’s design. Entities to whom Parallel lends DOT or KSM may or may not be successful in their parachain auctions. This means that the parachain auctions will create continuous cash flow on Parallel that is not limited to the total capacity for parachains counted individually, and entities who do win will be able to harness the value of the parachain without the difficult burden of financing it by themselves, or through crowd loans. This, in turn, will make the parachain market much more attainable. It will also maximize the potential utilization of parachains overall, which is an inherent good for the Polkadot ecosystem. 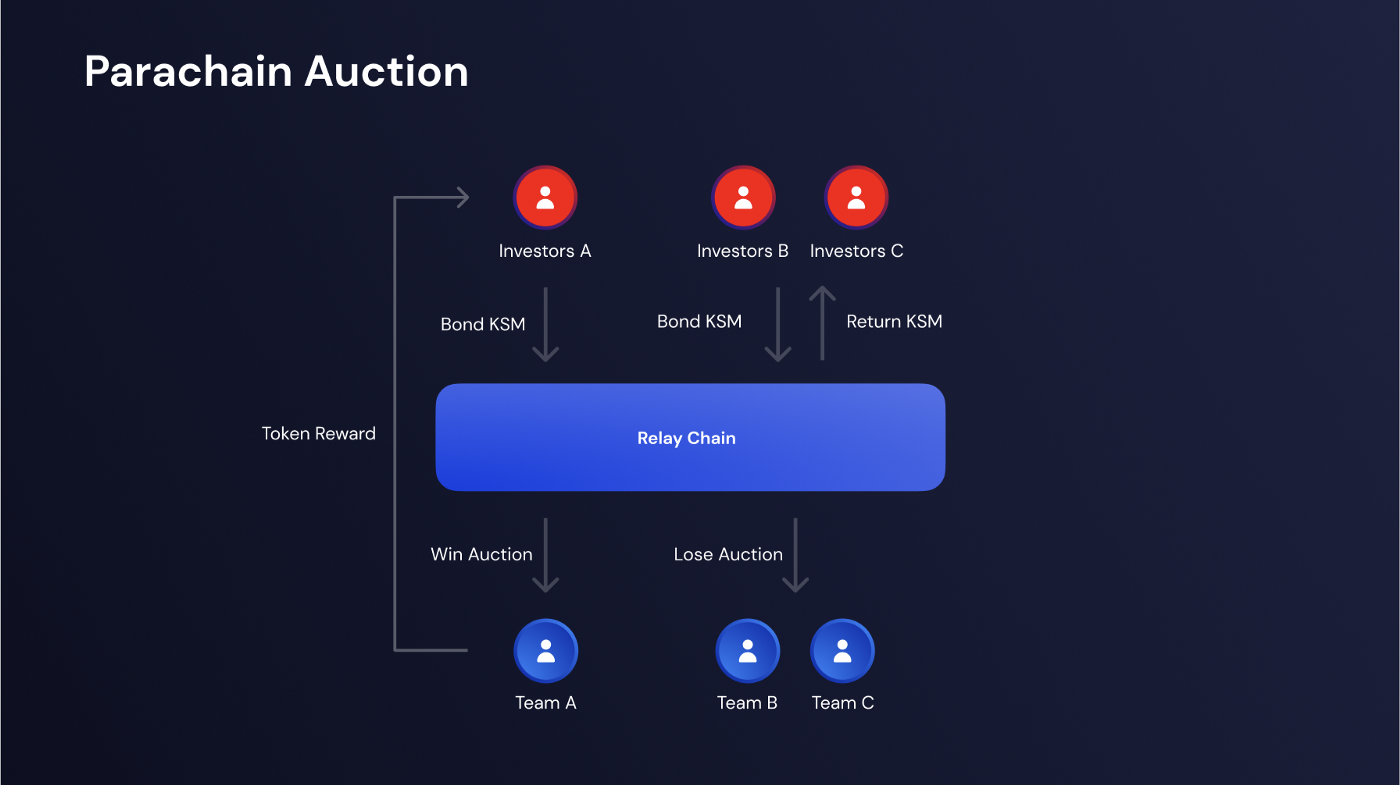 In its current state, DeFi is built to gratify short-term bull runs, but for a more competitive and long-term advantage, the excitement of DeFi will need to be exposed to the more practical merits of TradFi. Interest rate swaps are one of the pragmatic tools needed in order for DeFi to break through the glass ceiling. With this functionality, institutional borrowers will be able to extend or reduce their exposure to interest rates depending on their perception of the market and their willingness to undertake further risks. Fixed-rate loans act as an anchor for the variability of floating rates. If a user is currently holding a fixed-rate loan, and they suspect that a bear market is on the horizon, and utilization will decrease in the near future, then they may switch to a floating interest rate in the hopes of paying lower interest. If the opposite is true, and they expect utilization to increase across the board, then they may choose to remain in a fixed-rate position, to capture a lower rate. 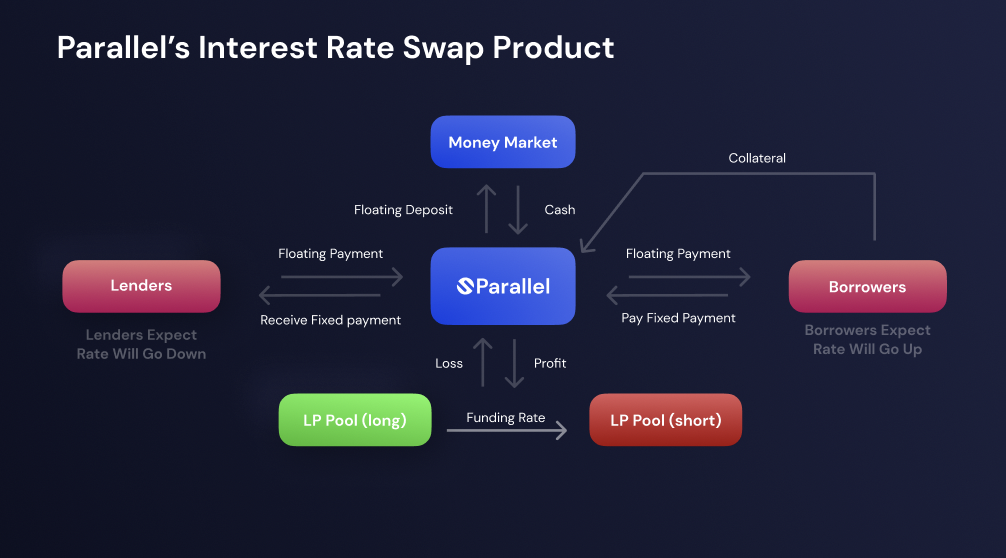 In its initial exploration of blockchain credit scoring, Parallel finance will set out to become the “DefiPulse of credit.” DeFi has a kind of intrinsic reputation system. Sentiment can be tracked qualitatively through social media mentions and quantitatively through factors like market cap, TVL, and dominance. However, in order for DeFi to be able to compete with traditional finance, it needs to be able to transparently rate the quality of borrowers and their debts. The credit reporting system will function like a check against rogue institutional borrowers, and it will also give lenders a second line of defense to negotiate repayment of their loans. If a large DeFi institution is reported as having defaulted on a loan, the negative impact of this reportage will affect the perception of the project’s token, and projects will seek to improve their creditworthiness as a result. The ability of blockchain to act transparently is indeed a valuable asset, and in the future, this ability may in fact help avert crises like the 2008 market crash, which resulted from non-transparent credit scorings.

A Durable Advantage: Why they starting in the Polkadot Ecosystem

On a strategic level, there is less infrastructure already developed on Polkadot, and thus more opportunity for beginning there. Polkadot is like the wild west, and the potential for returns is much higher. In particular, the parachain market has the largest extractable value of any untapped market in DeFi, and Parallel has the chance to be the first mover. They expect our auction loans to be very attractive and freeing for founders who want to launch on their own parachain, but don’t want to allocate a large portion of their resources in advance. Parallel can also be the first to offer compound staking to a massively underexposed market of DOT and KSM holders.

In addition, it is important to start our work on Polkadot, because Polkadot is the only blockchain that has created an ethos of collective innovation fundamentally as a consequence of its design. When Polkadot reaches critical mass, the “chain wars” will be ineffectual, because every chain can be routed through Polkadot. This makes building on Polkadot even more important as a hedge against siloed capital. Only by launching on Polkadot can Parallel always front run the hype cycles of being on any chain in particular, by always having access to any chain in general.

They also intend to make our platform available on Ethereum in the future. Currently, however, they are focused on the Polkadot ecosystem. Launching Parallel in the Polkadot ecosystem first, where staking is already widely available, will give us the necessary time and market penetration to take our platform to Ethereum, where the need for leverage staking will soon be much greater as a result of Ethereum 2.0.

A special thanks to our partners for their continued support.