As the space evolves and the market matures to offer comparable options to those looking for alternatives from traditional financial ecosystems, the need to develop the technology and address the limitations of this new industry is imperative to its success. Such was the need to address the four main shortcomings identified by the Foundation: speed, scalability, interoperability and trust. From decentralized or centralized exchanges, to the days of ICOs and STOs and the budding seeds of DeFi, the exploration of these technologies require pioneers within the space to work together to address these challenges. OAX Foundation strives to provide support within this space, through tools, technology, applications and community support.

OAX Parachain: OAX Foundation aims to remedy the limited utility of OAX ERC20 tokens by building OAX’s own blockchain, built on Substrate as part of the Polkadot network. The parachain should support DeFi APIs and allow for the creation of UX friendly DApps. 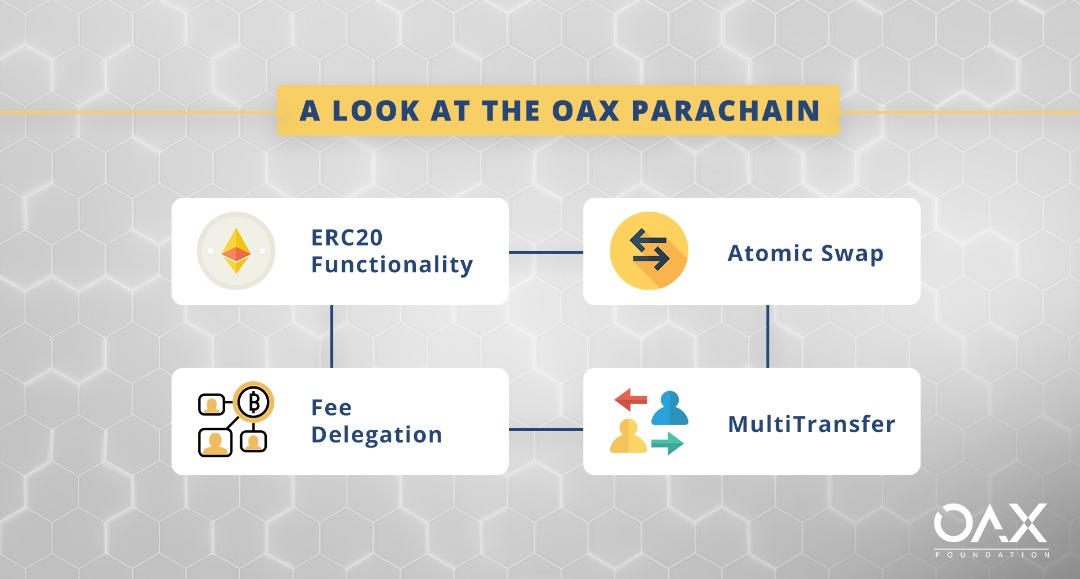 The current development of the OAX Parachain is a coordinated dance between the team and existing technology and the Polkadot advancements. At present, the team is focusing on four key features: ERC20 functionality, atomic swap, fee delegation and MultiTransfer.

ERC20 functionality: Representing other tokens on the OAX Parachain, To support DeFi use cases such as lending or swaps, this will be akin to ERC20 on Ethereum or eosio.token on EOS.

Atomic swap: Allowing swap between two tokens with one single transaction. Traditional blockchains have an API to transfer tokens between wallets. Swaps involve two transfers and atomic swaps are done to ensure that both legs of a swap are guaranteed. Atomic swaps are done using smart contracts involving the swap of two distinct tokens. In the case of a swap between two ERC20 tokens, the chain for both tokens would be Ethereum, but still require two transactions. A native swap substrate runtime module (SRM) would provide the same guaranteed execution, but in one transaction rather than two.

Fee delegation: Allowing the gas cost to be paid by a third-party. This feature eases adoption for DApps because users do not need to have native OAX tokens in order to transact with the OAX Chain. Ideally, this feature allows the opportunity for users that do not have a particular token, to still pay for gas fees, thereby removing a significant hurdle for DApp adoption.

MultiTransfer: Allowing developers to batch multiple transactions into one By avoiding repeated fields (such as the “from:” address which would be identical for each inner transaction), minimizing duplicate fields would allow for batched transactions to be smaller, hence resulting in a lower gas cost. The hope is that these features will only serve as the initial functionalities of the OAX chain, and will include more in the future. The team also believes that they will improve UX and DApps to attract users, a step towards reaching mass adoption.

OAX Token: OAX has placed the highest priority on addressing the four fundamental challenges that the digital asset ecosystem faces. The work done thus far has existed thanks to the support of the community through reviewing their work and giving feedback on their open source code, but also through their existing OAX ERC20 token. Moving forward, the OAX team will be exploring a discretionary 1-to-1 token swap when the parachain is complete and stable. The intention would be to keep current supply; meaning that any OAX token circulating on Polkadot would have been burned on Ethereum beforehand. The primary focus for the team is to ensure that they enhance the utility of the OAX token.