In recent years, Polkadot has become a very familiar ecosystem to crypto lovers because of its advantages. And if you've followed the developing process of this ecosystem from the beginning, you will probably have heard about Substrate many times.

Blockchains built for Polkadot use a home dev framework called Substrate, which is the most advanced and easiest blockchain framework for developers. Specifically, developers can use it to build custom chains for different purposes. Besides, in case developers want to fix or update their blockchain, they can easily do this without a hard fork.

In fact, Substrate is an innovative, modular framework for building blockchains. With Substrate, people can build their blockchain quickly and easily. Moreover, using Substrate would bring users a lot of benefits, for example, they can receive cross-language support, easily have forkless runtime upgrades, as well as transparent decision-making.

Let’s together figure out 10 Substrate-based projects that you must know when learning about the Polkadot ecosystem. 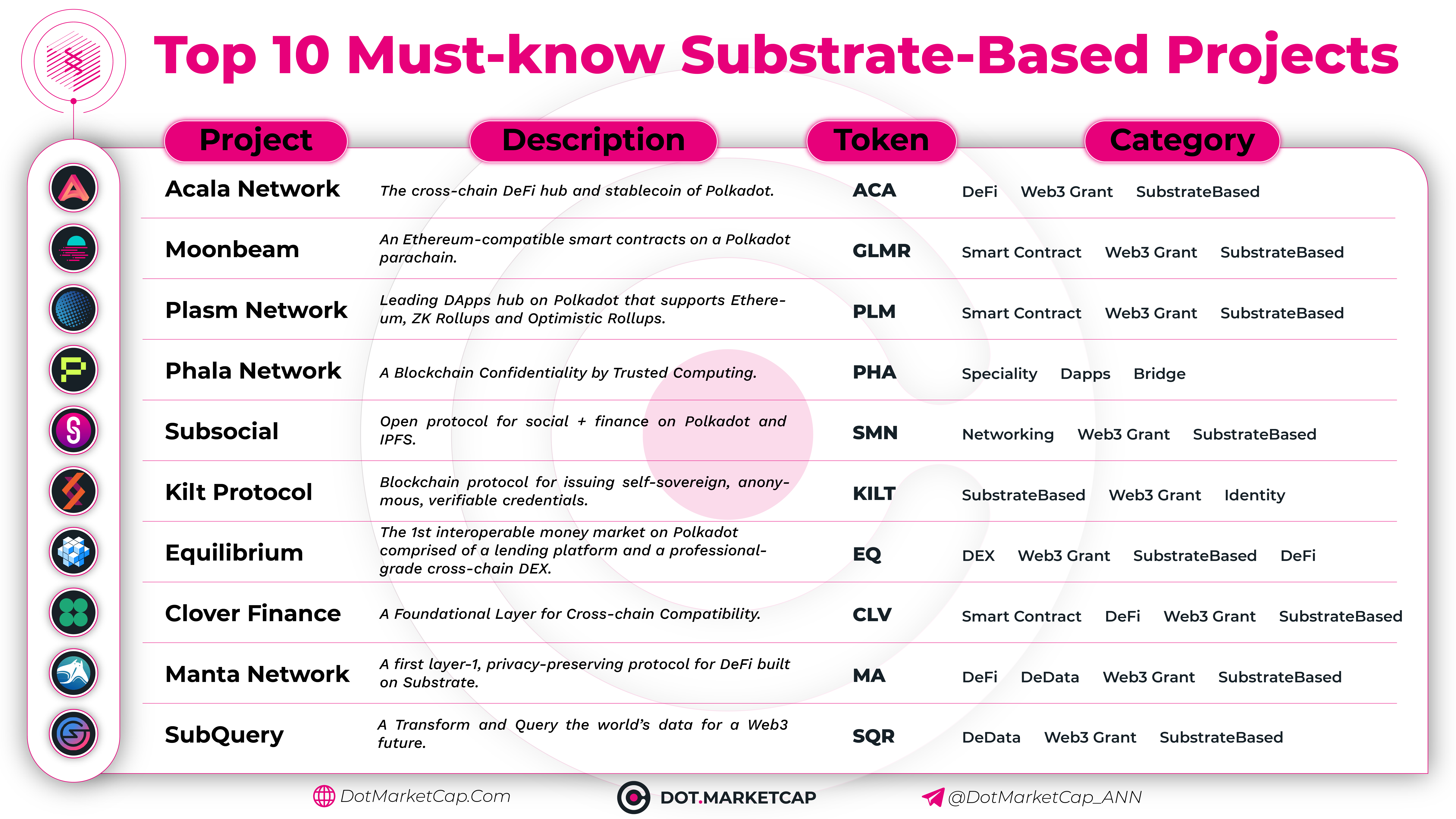 With the empowerment of Polkadot, it is looking quite promising that Acala Network can enable true interoperability, economic and transactional scalability. Acala was the first decentralized financial corporation to offer a set of protocols: a stablecoin protocol to play the role of Polkadot's DeFi building.

Moonbeam is a developer-oriented blockchain that strives to provide compatibility with the existing Ethereum developer toolchain and network. It does this by providing a full EVM implementation, a Web3-compatible API, and bridges that connect Moonbeam to existing Ethereum networks. This allows developers to deploy existing Solidity smart contracts and DApp frontends to Moonbeam with minimal changes.

Moonbeam will also be a parachain on the Polkadot network. That means it will get shared security from the Polkadot relay chain and will be able to integrate with other chains that are connected to Polkadot.

Plasm is a real-time module library based on Substrate. It is a place where developers can add Plasma features into their Substrate chain. By using this library, developers can build a blockchain which can be scaled within a couple of minutes. Substrate included two parts: Substrate Core and Substrate Runtime Module Library (SRML). Plasm can custom key points on Substrate with SRML and then create the new natural Substrate chain. Plasma is a layer 2 solution to scale up the blockchain. Plasma will help restructure the economic potential of the blockchain, this restructure will help blockchain can operate autonomously without the management of creator and operator. In the ideal situation, the blockchains of operators can be scaled without having any limit.

Plasm Network can be seen as an infrastructure which can scale and interact with Web3.0 . Plasm Network is built on Substrate. Thus, Plasm has very high potential of becoming a parachain of Polkadot in the future and will work as a scalable smart contract platform. This allows Plasm to fill in the gap of the Polkadot’s design. The ability to extend is surely one of the most crucial demands that DApps developers need and if they choose Plasm, they won't have to worry about scalability.

Phala Network is a Substrate-based interoperable cross-chain confidential smart contract platform, aiming to provide privacy computing and data confidentiality services for all users and companies. Empowered by the computing powers of TEEs, Phala Network will be a parachain on Polkadot and the infrastructure of next-generation privacy protection.

Unlike Bitcoin and Ethereum which build consensus based on each single node to solve double-spending issues, Phala smart contracts are trustless themselves because of a physically isolated secure enclave in CPUs — the Trusted Executive Environment. The security of the whole network can be guaranteed without time-costing consensus algorithms and Phala miner nodes can be freed from the consensus validating work to run contracts computing parallelly. Each one of them will be able to host one contract with its full computing power, which enables the computing performance to scale linearly as the number of miners grows.

Subsocial contains the blocks such as the spaces, posts, comments, likes, & follows, which are familiar to every social media platform’s users. All posts and spaces are associated with public key pairs so that all content can be correctly attributed to the posts author/owner. On Subsocial, users are the owners of the network and can govern each space where they are members. It is like a Decentralized Autonomous Organization where members can have ownership and decide the way that a space is governed.

KILT is an open-source fat blockchain protocol for issuing claim-based, revocable and verifiable credentials for Web 3.0. It allows users to claim arbitrary attributes about themselves, have them attested by trusted entities, and store the claims as self-sovereign credentials. The protocol offers a simple JavaScript SDK so useful applications can be built without requiring any blockchain development skills.

KILT provides a base layer for verifiable credentials in the Web 3.0 world. We’re building a permissionless trust infrastructure for real-world business cases like their DeFi collaboration with Polkadex and Fractal, DNA testing with Degenics, and  upcoming projects in gaming and climate change. KILT also partnered with government entities including Germany's federal energy agency (DENA) to build a national digital registry for distributed energy resources. KILT is also part of GAIA-X project, initiated by the German Federal Ministry for Economic Affairs and Energy, to build a European alternative to centralized cloud solutions.

If you are familiar with EOS, you might have heard about Equilibrium. Equilibrium used to be a project on the EOS network but now it is coming to Polkadot Ecosystem to add the fuel to the DeFi fire. Equilibrium's cross-chain protocol will offer pooled lending, borrowing, trading, and staking services, according to the project team. The protocol's developers intend to make Ethereum and other blockchains "fully compatible with each other" by offering a "unified interface" for DeFi use cases. On the first day of October in 2020, Equilibrium raised $5.5 Million via its new “token swap”. In this token swap, users of EOS network will swap their NUT token on EOS to receive the EQ token on Polkadot network. Beside, Equilibrium team received many grants from Web3 Foundation to pioneer services that facilitate other projects’ migration to Polkadot.

Clover is building a foundation layer for DeFi applications to seamlessly operate. Clover aims to reduce the development threshold for upper-layer applications, facilitate a gasless transaction layer to simplify user experience for non-crypto users, and provide a wide range of developer tools from identity-based scripting capabilities to built-in cross-chain interoperability. Clover will put together a large user base and different projects into a one-stop open and integrated financial service platform on Polkadot, using the Substrate framework. Clover will compete to join as a parachain for Polkadot to achieve a high level of interoperability, and to become a digital finance portal and DeFi service provider on Polkadot. Apart from the foundational layer itself, Clover is building various cross-chain wallet implementations from desktop to mobile, allowing users to interact with DeFi applications from various front ends.

Manta is a set of easy-to-use and secure (open source and auditable code) protocols based on Substrate frameworks. It uses zk-SNARK to provide complete end-to-end anonymity, high throughput, and high cross-chain interoperability (it supports Polkadot and its parachain mainstream cryptocurrencies and stable coins). It includes a decentralized privacy payment protocol, a decentralized privacy token exchange protocol, and a decentralized privacy lending and synthetic asset protocol to be developed in the future. Manta’s team believes that DeFi, for now, has its most value in permissionless and anti-surveillance while current services in DeFi have their deficiency in privacy, scalability, usability and liquidity. Under the current landscape, only when a stable coin that fully supports anonymity and cross-chain interoperability and the relevant DeFi protocol being created can the tremendous value of DeFi be released and deployed, and it is at this point that DeFi will have the chance to overtake the traditional financial industry.

A quarter-century of digital transformation has gotten us  to the advent of the Data Age. From the introduction of email through to broadband, WiFi, cloud storage, SaaS and big data analytics, the pieces have been moving into place. Now, in the year 2021, their are at the cusp of something new. To thrive in this new age, every organization needs a complete view of its data — real-time insight, with the ability to take real-time action.. The demand for services which helps query and process data of blockchains in general and of Polkadot Ecosystem in particular will be huge when Polkadot Ecosystem is totally completed. Since decentralization means data is distributed across the world, the query service of decentralized networks has to be as fast as centralized networks so that Web3.0 dream can be true. Inspired by The Graph, Subquery aims to solve that query problem. SubQuery team thinks Polkadot/Substrate teams should not worry about building their own server indexer but should focus 100% to build their DApps.