A deep dive into the top Polka-projects, providing unbiased information.

A Deep Dive Into Equilibrium

If you are familiar with EOS, you might have heard about Equilibrium. Equilibrium used to be a project on the EOS network but now it is coming to Polkadot Ecosystem to add the fuel to the DeFi fire. Equilibrium's cross-chain protocol will offer pooled lending, borrowing, trading, and staking services, according to the project team. The protocol's developers intend to make Ethereum and other blockchains "fully compatible with each other" by offering a "unified interface" for DeFi use cases. On the first day of October in 2020, Equilibrium raised $5.5 Million via its new “token swap”. In this token swap, users of EOS network will swap their NUT token on EOS to receive the EQ token on Polkadot network. Beside, Equilibrium team received many grants from Web3 Foundation to pioneer services that facilitate other projects’ migration to Polkadot.

The Most Characteristic Features of Equilibrium:

Bailouts and system liquidity: EQ tokens facilitate Equilibrium novel liquidation mechanism, called a bailout. Bailouts are far more reliable than the usual DeFi auction. Users earn a yield by securing loans in the system and locking crypto assets in Equilibrium’s bailout pools ahead of time. (EQ token is one of the accepted assets.) Providing this liquidity in advance assures that there is always sufficient collateral in the system for liquidating borrower debt. Furthermore, you may use the EQ token as a collateral for borrowing stablecoins and other assets. This means that EQ token will act as margin against leveraged exposure to other assets, whether it’s spot crypto or synthetic derivatives (perpetual) markets. Equilibrium team may eventually come up with a set of incentives to make EQ tokens more appealing to use than other assets..

Equilibrium is driven by a set of system parameters that can be modified via a decentralized on-chain voting process. EQ token holders are able to vote for some components of this governance. Development team makes use of Substrate’s democracy and council pallets to operate in a manner similar to Kusama and Polkadot. These modules seek to let the majority of tokens on the network determine the outcomes of key network decisions, like changing the minimum collateral threshold. These decisions are made after stake-weighted voting on a proposed referenda, and an autonomous enactment system ensures that the users’ decisions are binding.

Equilibrium strives to attract liquidity to its substrate, and has put aside 12 million EQ tokens (10% of the initial supply) to encourage crypto users to bring assets into its ecosystem. Since the availability of assets largely depends on the availability of bridging solutions, Equilibrium will start tapping into the liquidity farming pool to reward users with the introduction of an ETH bridge. The liquidity farming pool will distribute EQ tokens to borrowers and bailsmen alike, based on their relative liquidity size. They will reward bailsmen first, and once EQ have a big enough liquidity cushion, they will reward borrowers tying rewards to actual borrower demand or utilization. Equilibrium will also leave some of the supply for our DEX plans, which include market maker incentives, periodical prizes to most active traders, and a referral program.

The lowest collateralization requirements, and a true collateral basket:

Overcollateralization is a common methodology in the DeFi space across many platforms. Users can overcollateralize their digital assets in smart contracts and get crypto loans or decentralized stablecoins in return. The only question is: how much will it cost you? Synthetix asks its users for a minimum 600% collateralization — if you want to get $100 in stablecoins there, you have to put up at least $700 of crypto. MakerDAO wants 150%. Compound wants 133%. But with Equilibrium, it just takes 105%. Furthermore, their design allows the network to drop the collateralization requirements to 100%. It might seem risky at first place but with their advanced liquidity in the bailout pool, the system will still remain stable even if the collateralization drop to 100%.

Beyond the expense of putting up their collateral, DeFi users are subject to paying annual interest. Most projects offer a flat interest rate that’s usually set by governance (often quite randomly) and has nothing to do with risks or objective reality. But Equilibrium’s flexible interest rates work algorithmically to reflect system solvency and let borrowers find a balance between risk and collateralization. If they choose to do so, users can reduce their interest fees anytime they want by fronting more collateral and making their positions safer. It’s one more angle of attack toward making DeFi more affordable.

The core currency of Equilibrium platform is EQ. EQ is the utility token that can be used for:

Paying fees for the DeFi applications on the network. 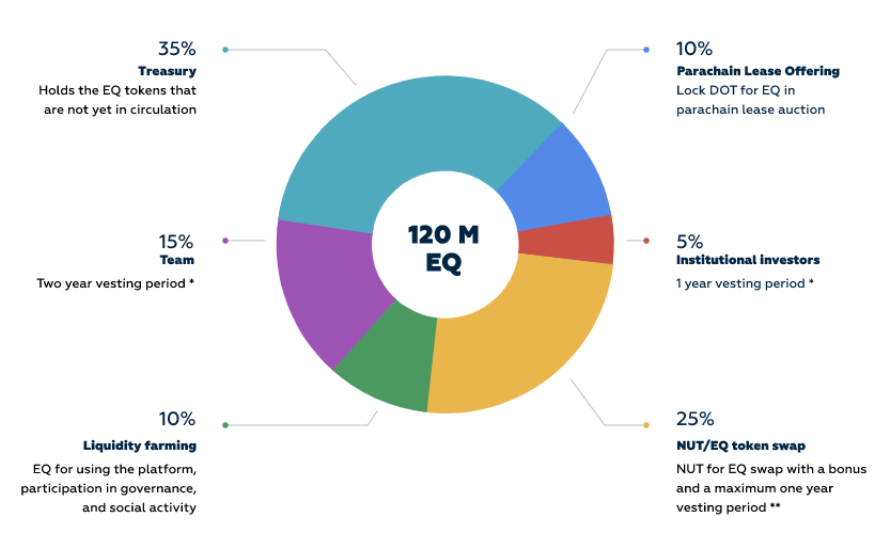 5%: For Ventures and Institutional which funded the Equilibrium development team in early days. Their allocation will be vested in 1 year.

25%: As you may know, EQ used to be NUT on EOS network. NUT holders will have a chance to swap their NUT token to EQ token with a bonus.

10%: This 10% will be used to encourage liquidity providers to join Equilibrium platform and also to pay for social activity such as marketing, events,....

15%: For the development team. Their allocation will be cliffing unlocked within 2 years.

35%: These are the EQ tokens that are not in the circulation supply yet. They will be held in the Equilibrium Treasury. 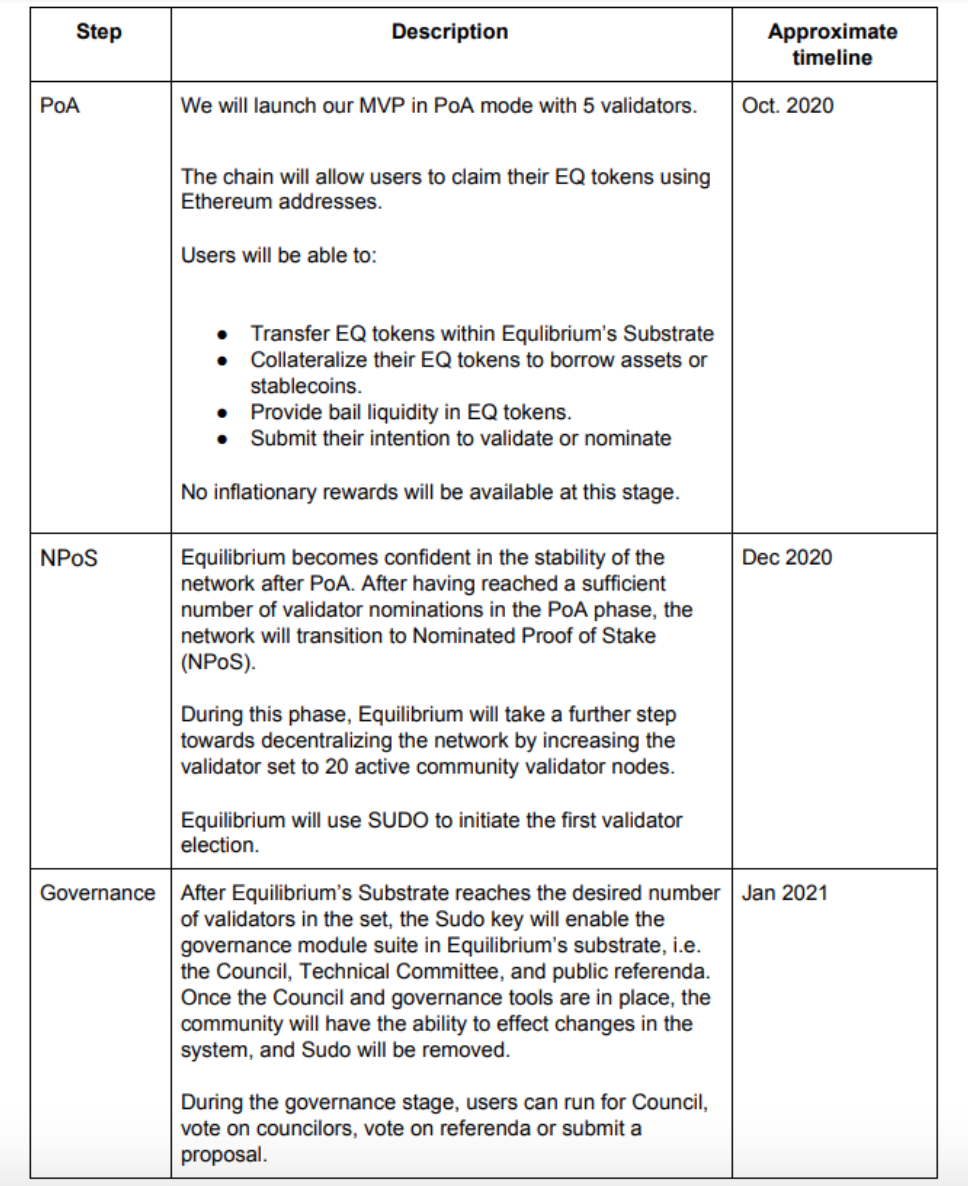 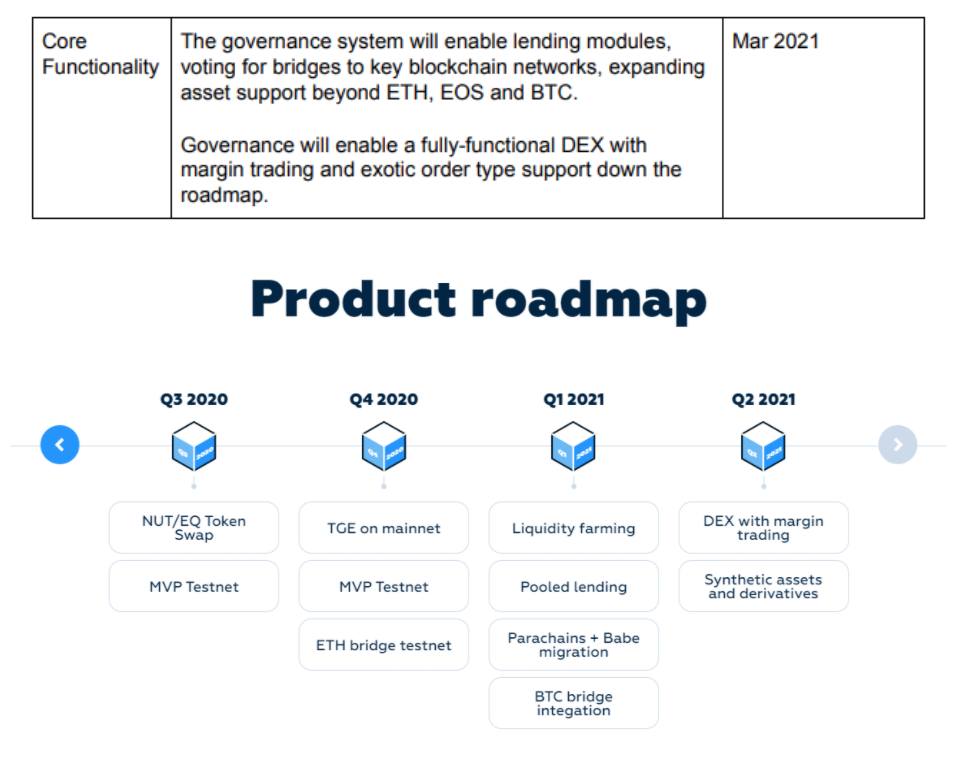 Partner and Cooperator of Equilibrium:

With the technologies and problems that Equilibrium can solve. Equilibrium is for sure the formidable opponents in the competition of the Parachain Slot.

Here’s What Equilibrium And Genshiro Did Last Month

Here’s What You Missed At Kusama Demo Day

How To Send Free Transactions In Polkadot

Here’s What We Covered During Equilibrium’s Ninth Community Call